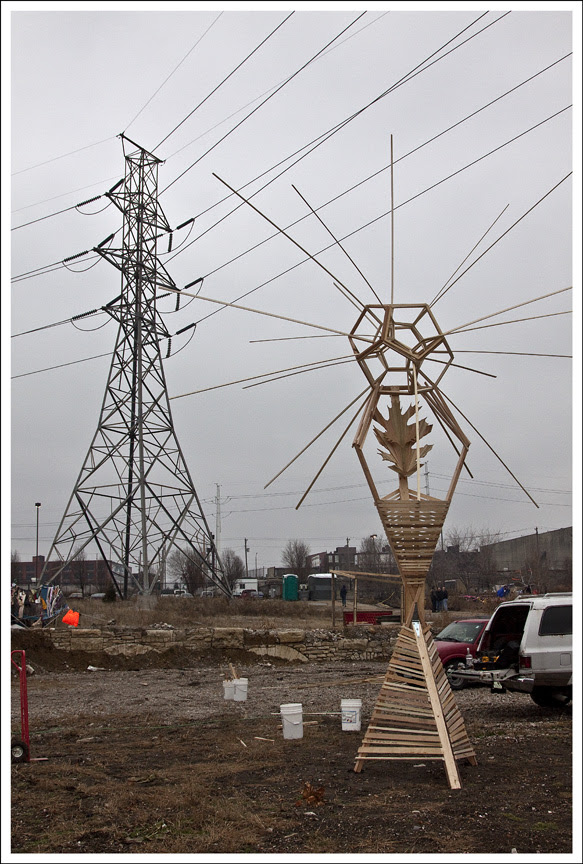 One of the central features of Artica was this wooden whatever-it-it is, perhaps six or eight meters tall tall. I watched some people assemble it and set it upright early in the afternoon. Just a few minutes later a gust of wind came through and blew it down, causing substantial damage to the top. The idea was to set this afire sometime late in the festivities, which went from noon to midnight. I had to leave at about 3:30 because of a family obligation. Looks like they got it reassembled and gave it the torch from what I see on the Artica group photo pool on Flickr. Sorry I missed that part.

Was this meant to be St. Louis' rinky-dink version of Burning Man? U "R" Us wants me to go to Burning Man with him in the Nevada desert in early September. As the family plans are shaping up, it's more likely I'll be cooling it in Ireland around that time.

I'm sure when they torched this thing it was most welcome. Looks like it was freezing out there. I lilke the way you included the power line thingy in the composition. It does have a sort of kachina feel to it.
V

Yeah, I'd go to Ireland too. Be sure to hit the pubs in Doolin for some great traditional music in an unspoiled location.

Two thoughts:
1) This is more proof (as if the two previous posts weren't enough) that St. Louis has been completely Californicated.
2) You are better off in Ireland than at Burning Man, unless of course, you, too have been Californicated.

I always wanted to go Burning Man, but I can't get passed the camping thing.

September is a fantastic time to go to Ireland. That's when we used to go.