STL DPB IN THE AIR - SURREALIST ART AT O'HARE 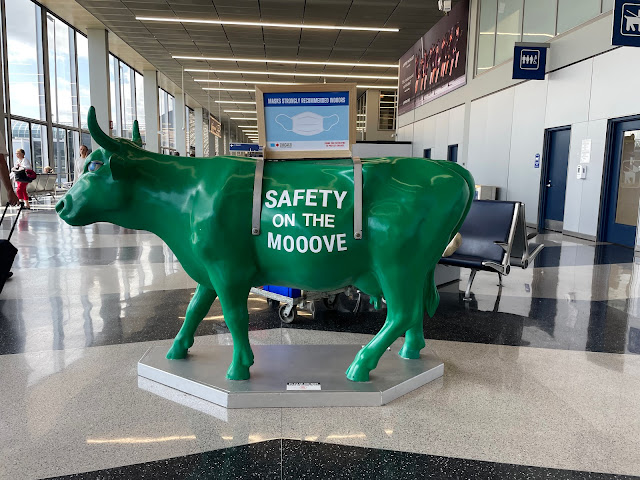 I just love changing planes at O'Hare airport in Chicago. It's something we've had to do a whole lot of times since American Airlines took over TWA, which was St. Louis' home town team. The blue sign on top of the cow promotes wearing masks, which precious few people were doing (our family being some of the exceptions).

So we flew from St. Louis to Chicago to Lansing, Michigan, which was the nearest airport to where our son and his family used to live except they moved to another town last week so now it's not the nearest airport. Plus there was an emergency landing at O'Hare that shut down a main runway for some time which stuck us in the smallest and most uncomfortable regional jet used in the US for more than an hour before we could take off. Then 90 minutes drive to where they live now, take the new house tour, have dinner, drive 45 minutes to a cottage on a lake which used to be near where they live but isn't now. And that's today's occasional rant.