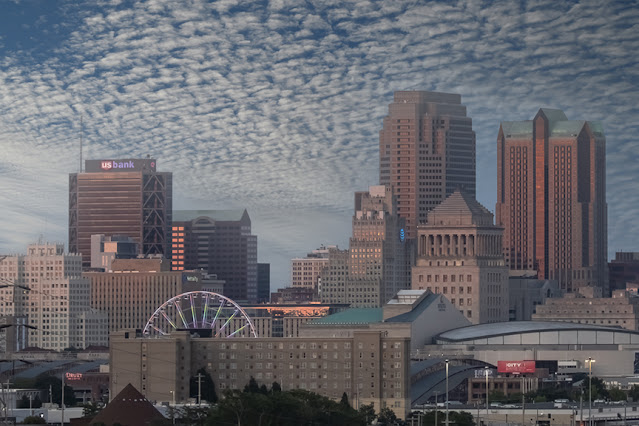 One of our City Daily Photo colleagues commented yesterday that it seems mandatory for cities to have a Ferris wheel these days, and it's nice to have one here. It is built on the side of Union Station, now a hotel and entertainment complex. There is an aquarium, a mirror maze, mini golf and more. Expensive but fun. But two things to note about this scene:

Something in this image is totally fake and it would take a Photoshop nerd to spot it. The newest version of the program has a tool called Replace Sky. It precisely finds the edges of everything in front of the sky and drops in a new background of your choice. These clouds weren't there. The actual sky was empty (see yesterday's post).

The tall building just right of center is vacant and has no immediate prospect of reuse. After the breakup of the old AT&T into the regional "Baby Bells," STL was the home of Southwestern Bell. It bought up some of the other regional carriers and then acquired the rights to the AT&T name. This building was, for a time, AT&T's world headquarters. Then they decided that St. Louis was Podunk and moved the operation to Dallas. I read that it is hard to repurpose a large building built for a single tenant so it just sits there.

Well, I did like the sky! Too bad about the ATT building.