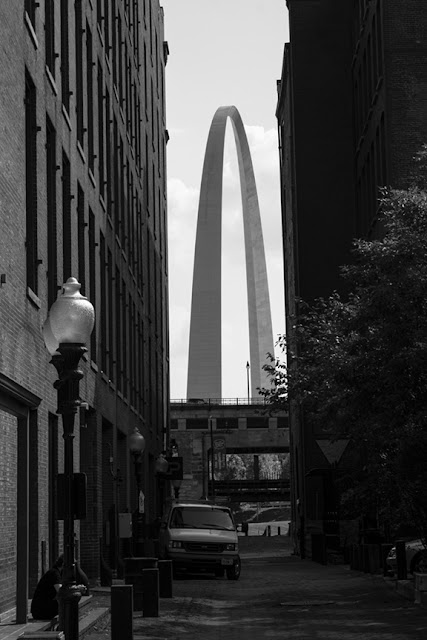 I've been complaining about having nothing to shoot. I was at the office part of the day yesterday and, while looking out my window, realized that I have not been to the Laclede's Landing area in a long time. It is a district just north of the Arch that contained old commercial buildings, some from the 19th Century. There was extensive restoration maybe thirty years ago. The area filled up with restaurants, bars and clubs, along with some office and residential space. The place was hopping on weekend nights.

Then, a few years ago, the foundation that supports the Arch renovated the whole grounds. Work on the north end shut off the main vehicle access to the Landing. Most of the businesses quickly withered and were given no compensation for the damage done to them.

Now access is some better if not as good as it was. A few businesses have come back but there is still a lot of empty space. I took this photo through one of the alleys. It's quite unoriginal - everybody takes this shot. Still, there is a bit of drama.
Posted by Bob Crowe at 12:01 AM

Terrific framing for the Arch!