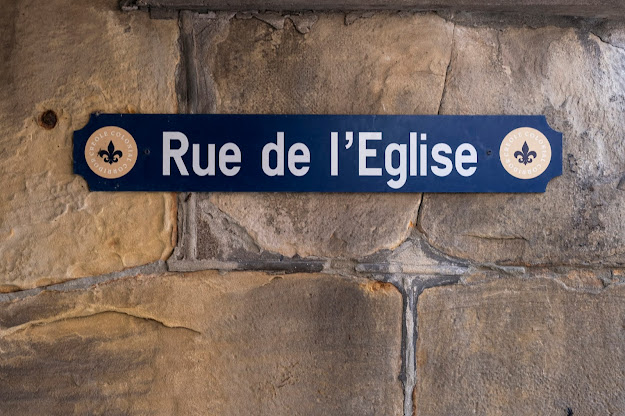 An affectation. It's true that we were founded by the French trader-explorers, Pierre Laclede and August Chouteau. (No one here except a real Francophone can come close to pronouncing the names correctly. https://news.stlpublicradio.org/arts/2014-02-27/pard-my-french-st-louis-peculiar-way-of-saying-local-street-names ) They both have streets named after them but Chouteau, the second banana, got the more important thoroughfare.

Anyway, the city mothers and fathers decided to give second names in French to several streets around the Arch, Old Courthouse and Laclede's Landing. They still have common American names, Broadway, Chestnut Street and so on. This placard is on the 19th Century stone foundations of Eads' Bridge. There is no church anywhere close, although there might have been one ages ago. Alors ça va.

All our street names here have French and English notations. Pronouncing this wouldn't be an issue to me.