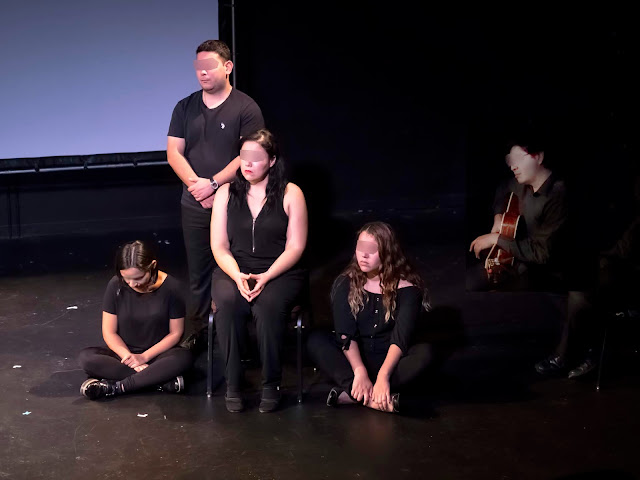 Last night I saw what might be the most powerful show I've ever witnessed at the Fringe. Crawling With Monsters is a multimedia narrative about the people who live in Reynosa, Tamaulipas, Mexico, directly across the Rio Grande from McAllen, Texas. Reynosa is dominated by narcos. The state has nearly collapsed.

Violent, sometimes random murders are the order of the day. The narcos are armed as well as the military. Gun battles in the street are common, day and night. Kidnappings are endemic, for ransom or sometimes the exploitation of children. Hundreds of people a year go missing. A popular music group disappeared. They were later found dead, their bodies thrown into a well, many of them decapitated. The good local people have no hope. This group, Latino Theatre Initiatives, is trying to let the rest of the world know.

I spoke to the director after the show. He asked me to mask the eyes of the performers to make face recognition more difficult. Even appearing here in St. Louis creates risk at home. I have so many more good pictures, most of them with tragic, beautiful eyes. It saddens me as a photographer that I cannot show them to you but the cast's safety is more important than my portfolio. I hope everyone in the STL area can see this show.
Posted by Bob Crowe at 12:30 PM

Title tells us: sensational info-tainnment, not researched and evenly presented news, Just whipping up anxiety instead of solutions.

Cloudia, are you suggesting that the show is infotainment and the company offers no solutions? These people live there. There are no evident solutions. They are reporting on the conditions of their lives.