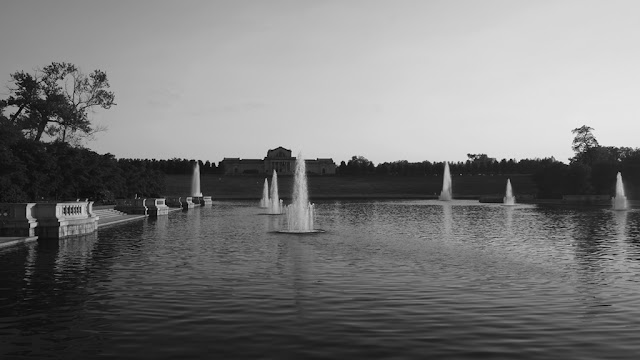 For most of the last five months I've set aside my trusty - and heavy - Canon 5D Mark III and have been using new equipment. The Canon was getting to be too much weight for my old neck, shoulders and back. I wanted something lighter that would maintain image quality. An old teacher recommended the Fujifilm X-T2.

It's pretty cool. Although it uses an ASP-C sensor (not full sized), I think the image quality is better than the Canon. An interesting feature is that it can emulate many Fujifilm film looks. They have developed many over the years. This picture of the Grand Basin in Forest Park emulates their Acros black and white film, with the addition of a red filter. I like it.

Early flight to New York this morning. Something very unusual to do outside of the city itself tomorrow. Reports by Sunday.
Posted by Bob Crowe at 12:01 AM

Pity that there are no clouds. With a red filter it would balance the total a bit more.