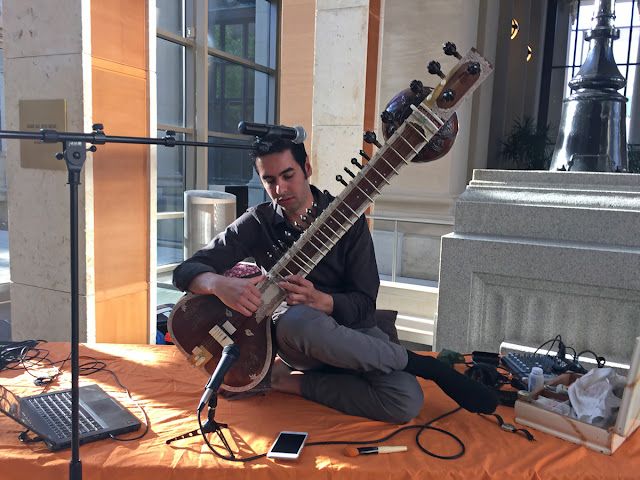 Yeah, we got 'em on every other street corner around here.

Last night Opera Theatre of St. Louis and the Missouri History Museum co-hosted a panel discussion about OTSL's upcoming production of Shalimar the Clown, based on Salman Rushdie's novel of the same name. We had a post about it a couple of months ago when Rushdie was in town.  The panel included Opera Theatre's general director, the composer, librettist, stage director and a scholar of South Asian history and culture.

The featured guest was the sitar virtuoso Arjun Verna, who was a consultant on the score and will play with members of the St. Louis Symphony during the performance. The sitar is a very complex, difficult and subtle instrument. Verna explained the concept or ragas and played excerpts from the opera score. We'll be at opening night on June 11.

I still have some material from the People's Joy Parade and haven't even started the Cinco de Mayo festival yet.

I remember that Rushdie novel. I tried learning to play the guitar as a kid but it wasn't for me. Listening to one of Arjun's tunes now.

It's a peculiar instrument to my ears... I can imagine it's a challenge to learn.

I can't wait to hear all about the opera. What a great experience.

I'm a sitar fan from way back when I discovered Ravi Shankar Bob, I think you're in for a big treat on the 11th!