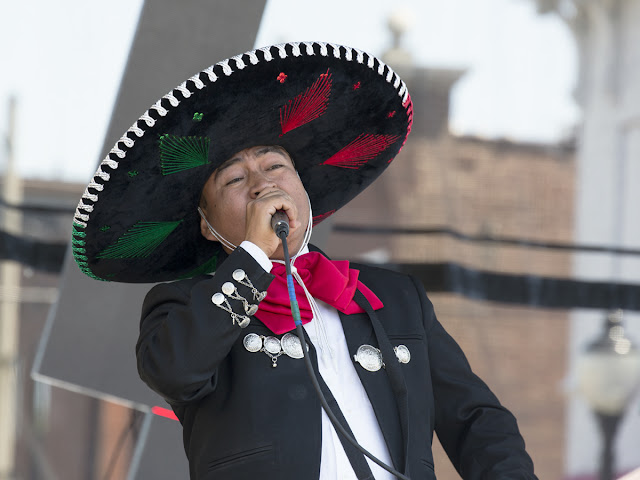 A mariachi singer at the Cinco de Mayo festival. (Cinco de Junio is not far away, is it?) This brings back a memory. We visited Mexico City once, many years ago, so long ago that we regularly used a travel agent. We told her we wanted to go there. She refused, saying that we would be kidnapped, held for ransom and then killed. So we used another travel agent.

We had no idea when we booked it but we were there over Independence Day in September. The luxury hotels were empty and dirt cheap, so we stayed at the Four Seasons. The hotel booked us for dinner on Independence Day night at La Hacienda de los Morales, perhaps the most elegant restaurant in town. There were many connected rooms. Mariachi bands moved from one to another, each group with a different look and sound. I will always remember the band dressed in white with silver and black silk trim, with a tenor barely more than five feet tall belting out La Bamba like Ritchie Valens never did. Unforgettable.
Posted by Bob Crowe at 12:01 AM

An excellent portrait. One wonders about the effectiveness of that travel agent.

I guess Mexico City can be a dangerous place sometimes. I wonder if there's a travel agent somewhere in Mexico City telling people to stay away from St. Louis.

Just one of many happy memories for you and Mrs C I bet Bob!