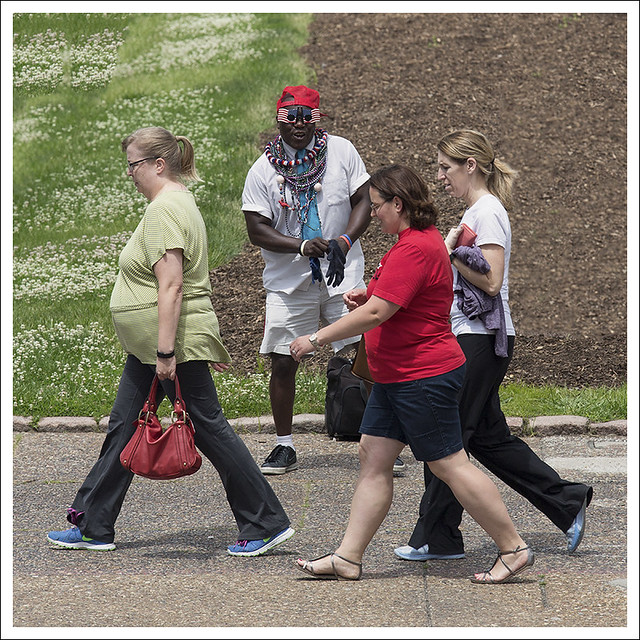 So, um, what does this photo say about race relations in St. Louis?

You see this man here and there around downtown. Obviously a body builder and full of energy. He has a boom box that plays loud hip hop and funk, dancing, let's say, vigorously. He has a tip jar on the ground nearby but doesn't collect much. As you can see, he's pretty out there.

These three ladies walking down Broadway are desperately trying to avoid eye contact. Would they react the same way to a gentle busker playing the guitar? A white busker?

As you know, Ferguson is one of our suburbs.
Posted by Bob Crowe at 12:01 AM

Hopefully not as bad as it looks Bob, some people walk on by no matter who is busking!

Terrific capture! I guess Ferguson still is on everyone's minds around there.

I think they probably just don't care for buskers. I don't think they're as ubiquitous in St. Louis as bigger cities.

Great photo with something to think about. I have to admit, I'd probably avoid eye contact with this fellow but, only because of the somewhat outlandish attire and from what you say, dance routine. I am glad you took this photo though, because not making eye contact means I would have missed those fantastic glasses.
I learned to be careful of street people and buskers when working in San Francisco. They grow a rather of aggressive bunch up there. Even giving them money could cause a lash out.

I tend to walk on by buskers myself, more often than not.

Good question. I try to not avoid eye contact.

There was a guy--a white guy--who used to play guitar outside the old Kmart at Gravois Plaza. He was a disabled vet. Yes, he did get good tips, until the manager chased him off and threatened to have him arrested.

I've observed frequently that even for those who don't give race a thought with African-American women and older men will go out of their way to avoid young black men, especially those with saggy pants and hip hop or rap music.

As far as I know there's only one race. Oh, and of course that Cro-Magnon I wrote about the other day. I guess it depends on what the busker is doing. If it's anything I like I often stop for a closer look. Maybe these gals were in a hurry.

It doesn't say a thing about race relations. The walkers aren't interested in what that guy is offering.