Back In The Nest 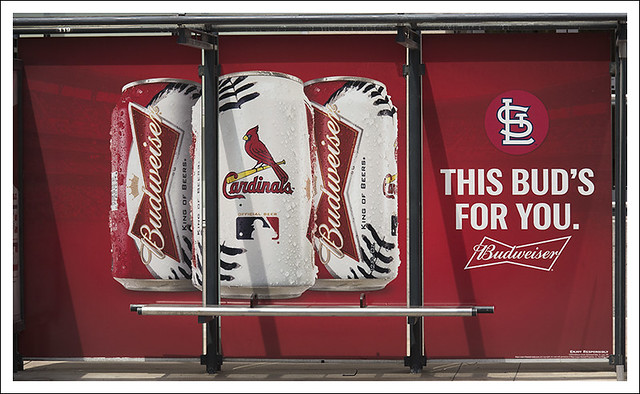 The Cardinals, who have by far the best record in baseball this season, were back in town last night after a long road trip. Another full house. No doubt they sold a lot of the beverage advertised on this bus shelter.

The opponent was the despised Chicago Cubs. The poor Cubbies, one of the oldest teams in Major League Baseball, have not won the championship in 106 years. You may see people walking around downtown wearing tee shirts that read "CUBS - Completely Useless By September."
Posted by Bob Crowe at 12:01 AM

I don't know anything about baseball, but I do like the cardinals - if only because I like the bird! ;-)

Sorry not my thing but you are right about Avenue de Sceaux. We did walk along that bottom part!

The Redbirds are certainly on a roll. Here's another slice of Birdman trivia: I hate Budweiser!

One wonders what excuse Cubs fans are going to be trotting out in September for why this latest season tanked will be.

"Bartman! It must have been Bartman!"

That made me laugh! I never saw that t-shirt when I was working in Chicago.

Very eye-catching. I like how you composed this shot.

Re the Cubs: Everybody has a bad century now and then, right?