A Mix Of Styles 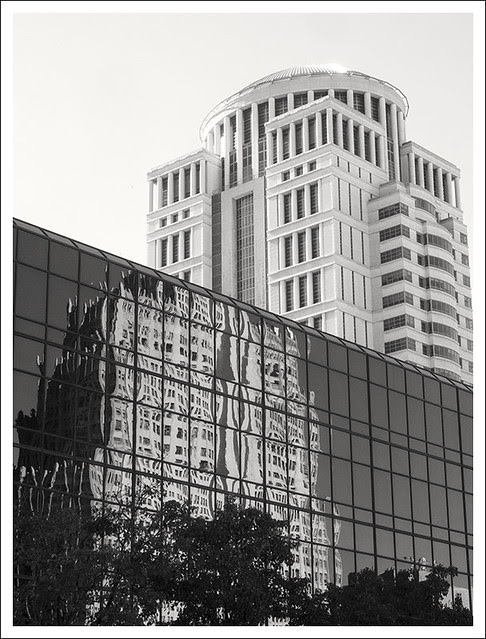 A downtown lesson in comparative architecture.

Top right is the federal courthouse. It has streamlined references to the classical, with its colonnades, quasi-temples in the top corners and domed top. It also exactly blocks the view of the Arch from the main highway running east into downtown, but what do they care.

The dark glass, International School structure is the low rise part of a Bank of America tower. The high rise part just to the left is an austere black, featureless octagon. I sometimes call it the Darth Vader Tower. The reflection in the glass is an old AT&T building that looks like a commercial castle. A block over is a modern 44 story tower that AT&T just announced plans to vacate, dumping about a squillion square feet of office space onto the already-depressed downtown real estate market. Good for tenants like me, I suppose.
Posted by Bob Crowe at 12:01 AM

AT&T are movers it seems. The reflection is beautiful and the building that can be seen behind slightly resembles the reflected one, adding a very nice touch of confusion!

At least the federal courthouse has some features at the top, unlike the boring box-like building in the foreground that has appeal only when it reflects other buildings.

It is the usual mix of new and old, tall and low, relatively decent and blah, that we find in most American cities these days.

Quite a contrast in buildings, Bob!

That is a fine black and white photo.