It's Too Darn Hot 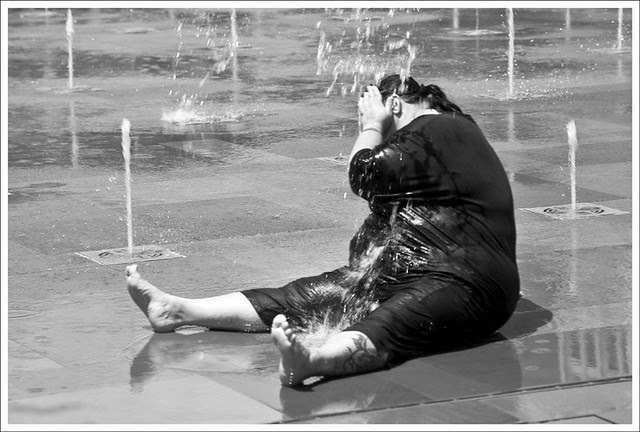 To its great credit, Citygarden lets people soak in its ponds and fountains rather than putting up "No Swimming" signs all over the place. That was an act of charity yesterday when the temperature was 98 F / 37 C.

Some of my clients do not have air conditioning. In fact, a fair number don't have electrical service. There have been a few heat-related deaths in our city. Other cities have had worse. I was 104 F / 40 C in New York City on Friday and 108 F / 42 C in nearby Newark, New Jersey. It never hit 100 F when I was growing up in NYC. And lets not even get to Arizona and down that way.

I'm 61. Sometimes I wonder whether I had the random fortune to hit human civilization at its apogee and that the general trend is downhill from here. No one knows yet. Let's keep taking pictures and leave a record. 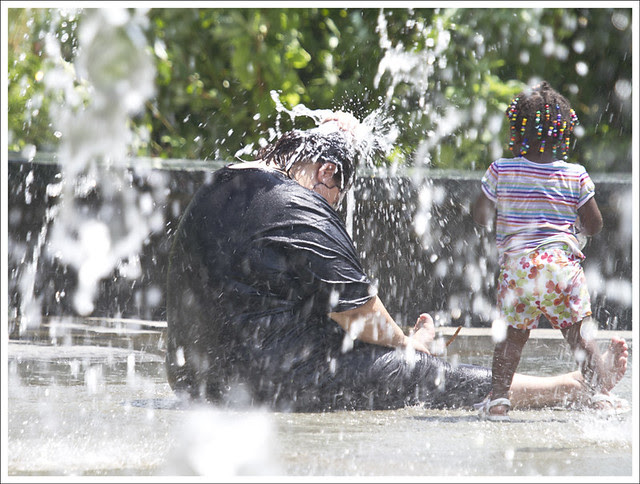 I am 63, and I believe you have the right idea--let's keep photographing and posting, for the record. The impact of the St. Louis heat can be felt in that woman's posture which makes both of your photos certainly a record of the misery summer heat waves bring, not just the fun of playing in a fountain.

It does get like that after a while Bob, I remember at the end of our summer when we'd had a month (it might have been longer) spell of between 35 to 40C you just about think 'this is it!!' but now here we are fairly chilly and thinking how nice it would be to be warm. Go figure!!

mmm ... two things here though, Bob. Both will probably get in in the dog-house.

Secondly, the climate is changing and heat waves could be on the increase. I understand what the USA is suffering now is weather, but keep it up for another century and weather is climate.

For the good of Americans, and for the good of the planet. your government should consider putting a price on polluting the atmosphere. The planet needs to do something for our grandchildre.

This reminds me of 2003. 42° C for 2 weeks in Paris and most of us, including me, don't have A/C except in the cars or the office. I hated it. Come on over, temps hovering around 16-18° C at the moment. Lots of refreshing rain showers too.

(I'm not complaining, I prefer my current weather conditions to yours. I would be one of the deaths that are reported in the USA as I deal with heat very badly).

these are wonderful, bob. don't you think every generation feels it is living at the apogee and all that will come in the future is downhill.

Grand images and I have to agree with Julie. Here in the US we are guzzling it like there's no tomorrow. Hmmmm
V

Nice shots, Bob. I am inclined to think that life is in cycles and at the moment we are in a slightly warmer part of the cycle. I remember The Coming Ice Age in the 1970s. (It got back to the 80s in Connecticut today.)

Hi Bob, I finally made it to Rockland after 2 years in Maine.

The St. Louis heat is absurd, here is another person absurdly keeping cool!

I'm afraid I subscribe to your apogee theory. Add to the mix climate change, more city concrete and asphalt, higher use of energy to cool and heat, uncontrolled building with no concern about its demands on water, and the future doesn't look so bright.

Great photos but goodness that woman needs to lose some weight. Heavy people feel the heat more apart from it being so unhealthy for them.

Too warm for me that's for sure. Very cooling photos here.

A remarkable first photo - like you I believe that letting people cool off under city fountains is an act of charity (or rather, not allowing it would be an act of barbary).

Your comment is a fair sour one - I have no idea where we're heading but yes just like you I worry that our children will have a much tougher life than ours.

These are great shots. As a chauffeur, I take many wedding parties to that park. The majority that go there all have to get the shot in the fountains and on the rocks by the waterfall. This has to be one of the best additions to downtown in a long time. It is definitely popular. People with their kids there at 11pm playing in the water. If it can create some QUALITY family time then it can't be that bad.

Years ago on the Acropolis in Athens I was so hot I nearly fainted. I stuck my head and torso under a faucet and stayed there for about three minutes, much to the amusement of passers-by. I empathize with this woman.