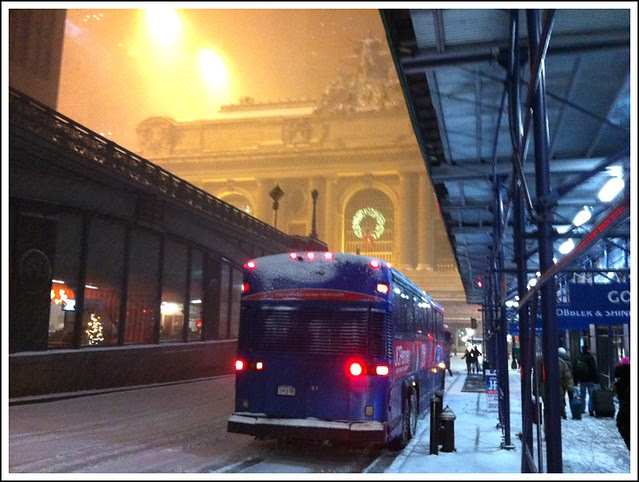 Plan A was get on a plane in St. Louis, fly to New York's La Guardia airport, pick up rental car and drive about 45 minutes northwest to my sister's house in New Jersey.

Plan Q(4)(f)(iii) turned out to be get on the last plane from St. Louis foolishly allowed to take off for the northeast; get 3/4 of the way there when the captain tells us La Guardia just closed from heavy snow and we're going to Hartford bloody Connecticut; captain tells us New York's Kennedy International Airport just got plowed and is allowing some landings and we're going there; land at JFK in heavy snow an hour after the scheduled arrival at La Guardia; wait an hour for the bags to come up; find that the taxis have all fled; take a big, safe-looking bus to Penn Station; get kicked off the bus at Grand Central Station in the midst of thunder snow and put in a tiny van with way too many other weary souls to the other train station cross-town; get out in blizzard chaos at Penn Station; get on a train to New Jersey; can't find the &^%^%$ next platform at the transfer station until a kindly transit policeman takes pity on us and shows us the way; get on the next train only to be stuck a few minutes later at a frozen switch; eventually get to Ridgewood, NJ, where my brother and brother-in-law meet us in an SUV; fail to get up the last steep hill to my sister's house and hike up the last quarter mile in blizzard conditions.

And now here we are, warm, fed and safe. There may be 2 feet / 61 cm of snow here before it all ends on Monday. Oh, and hurricane force winds here and there overnight. And so to bed.

Above, the view at the Park Avenue South bus transfer point looking toward Grand Central Station. Below, ominous security sign on the NJ Transit train to Ridgewood. Both iPhone photos. 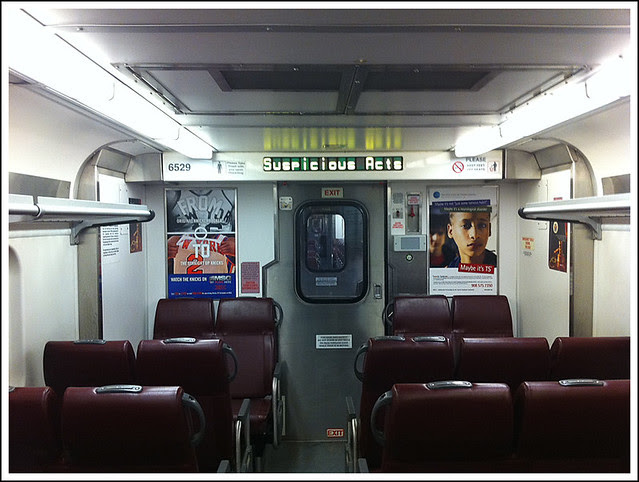 Stay warm and safe! Remember furniture will burn if the power goes out.

Do you think that the snowstorm is a suspicious act?

What a story. Good thing you had that aptly named other plan. The one that only a lawyer could name thus.

What a venturesome trip! This reminds me of the movie "Planes, Trains and Automobiles" with Steve Martin and the unforgotten John Candy. You should write a book. All the best!

The stuff of great holiday story telling and you, my friend, have told it well. So glad you're safe and snug. Welcome to the east coat.

You should make a movie out of that whole deal. Reminds me of the "Out of Towners"! Glad you're safe and warm now.
V

Good thing you arrived safe. It is a great story and I love the way you tell it. Enjoy these days with your family in NJ.

Wow, rarely do I read an entire post but yours held my attention. Sorry for the crazy trip but thanks for sharing it...well written and entertaining. This will be one of your Christmas' to remember!
machelle

Wow, that was quite an adventure! And, you've done such an excellent job capturing a couple of photos for us. Stay warm!

... just roll with it and have a wonderful time in the City. Enjoy! As AEN always says, "what me worry?".

Lol! I know you weren't but at least it's an entertaining story NOW! Wish you could send some of that snow our way.

I love that top shot of the bus at Grand Central.

You've got time on your hands, now, eh?

At least you (a) got on a plane and (b) ended up in NYC! That's wayyyy ahead of most folks.

But I hear ya. Transportation in blizzards is awful.