THAT HOUSE ON THAT STREET 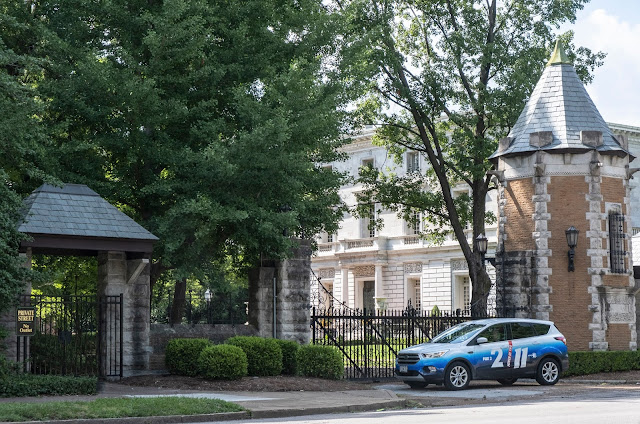 You have seen this view on television, in electronic media or a newspaper. This is the entrance to Portland Place, a private street filled with old mansions in The Lou's Central West End. You also saw the owners of this mansion, fellow members of the local bar, standing in front. He had a semi-automatic rifle. She had a small hand gun pointed at the passing protesters, finger on the trigger. It is unclear whether the crowd broke through the locked gate.

The car in the foreground is from the news department of a local television station. No particular repercussions so far but the story has not ended.
Posted by Bob Crowe at 12:01 AM

Nice looking dwelling...but those people don't deserve to live there....

It indeed reached also the dutch newspapers but if we got the whole story I don't believe it.

One report I saw said that protesters had threatened to kill their dog, but who knows what was actually said or why. I am surprised they didn't have a security camera on their property. If they do, it would probably show what actually happened. It was dangerous the way they were pointing their firearms.

Never heard the whole story but saw the image all over the news. Gun culture is crazy and dangerous.

Oh yes, I've seen the pictures. I saw a story in the NY Times that the guy feared for his life and thought his home was going to be invaded. I'm not sure I buy that. I've been thinning out my library of books that past few weeks and I came across the photo book of Westmoreland and Portland Places. I kept it.

Looking here you wouldn't think that could even happen Bob, looks so respectfully proper.. as they say you never know what goes on behind closed doors 😱