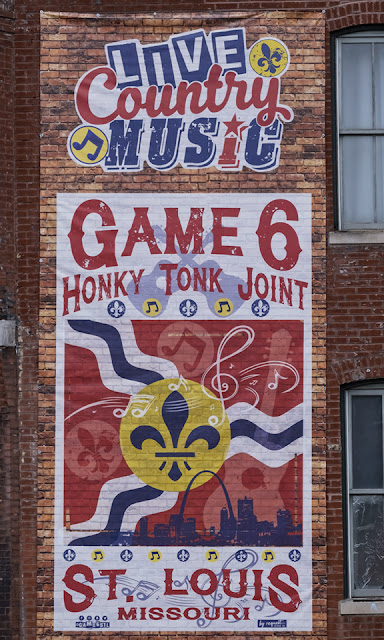 I'm not a big fan of country music since I came from an alien culture. I grew up listening to Cousin Brucie on WABC AM in New York and my father's boss was on the board of the NY Philharmonic. When I came to St. Louis U. in the fall of 1967 there was different air to breathe. Didn't have enough money to fly home to (by then) New Jersey that first Thanksgiving so I got a ride with my roommate to his home in Nashville. His brother-in-law was the PR director for the Grand Ole Opry and got us in backstage to the Saturday night show at the Ryman Auditorium. There were so many sequins under the stage lights that I was blinded for days.

This bar gets its name because it is one block from the baseball stadium and there are seven possible games in the World Series. The device in the center is the flag of the City of St. Louis, which I think is pretty cool. It celebrates the confluence of the Missouri and Mississippi rivers here and our French heritage.
Posted by Bob Crowe at 8:27 PM