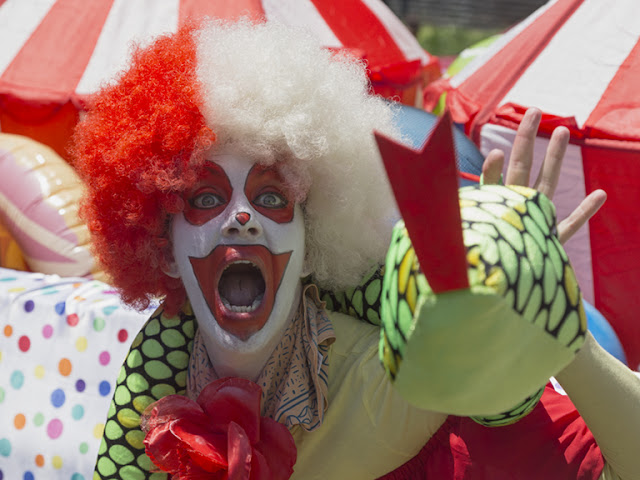 It's the beginning of May. The Lou has the double dip of the People's Joy Parade and the Cinco de Mayo Festival. There's nothing like the PJP anywhere. No bureaucracy. Anyone can join who shares the spirit.  And lots of people do.

Cinco de Mayo isn't a big deal in Mexico. It marks the unlikely victory of the Mexican army over the wannabe French imperial forces. (Did you know that France was briefly the colonial power in Mexico? It was a bad idea.) In the US it has become a celebration of Mexican-American culture and an excuse to swill large amounts of Jose Cuervo and Corona. (I prefer Sol or Pacifico when drinking Mexican suds.) There's tons more of this to come.

that is one of the best clown shots I've ever seen.

Yes, I do know of the French misadventure in Mexico. Misadventure sums up a lot of what was going on about France in those days!

It's a brilliant shot Bob but oh lordy​ I hope Aimee doesn't see it, she'll have nightmares for a week ☺