Moonrise At The Space Station 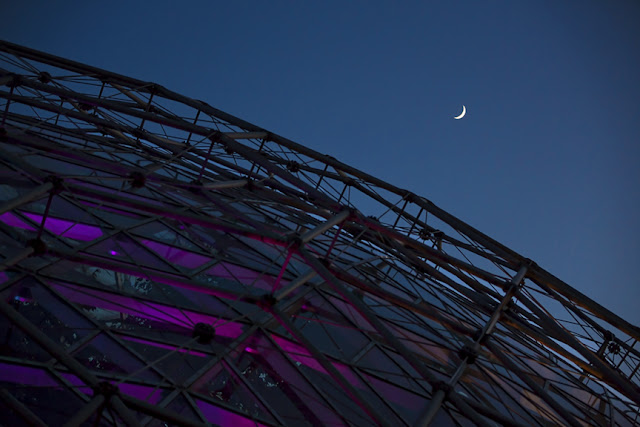 Nah, it's the Climatron at the Missouri Botanical Garden, a geodesic dome that somehow contains four different climactic zones. The family went to an event at the garden Sunday night, more about which soon.

Yesterday's photo was from the annual Annie Malone parade. The organization is a major provider of social and economic services to the area's African-American community. The parade is always a great photo op and there will be more from it, too, as soon as I can work it in. I think Olivier's comment on the Facebook version is correct. He just wanted to fly.

We ordered Madeleine her first camera today. After all, the child will be four years old in August. It's time to get started. There may be some guest posts.
Posted by Bob Crowe at 12:01 AM

Tres joli composition Bob! I can't believe Madeleine is almost four.. where on earth did the time go! She is definitely ready for a camera now.. what did you have in mind? Something pretty simple to start with. I can't wait to get Pax her first camera, of course I did get her a toy one when she was two, she had great fun telling everyone to 'smile' then click 😀😀

Looking forward to those guest posts soon!
(I too am curious to know what camera you've ordered for Madeleine...)