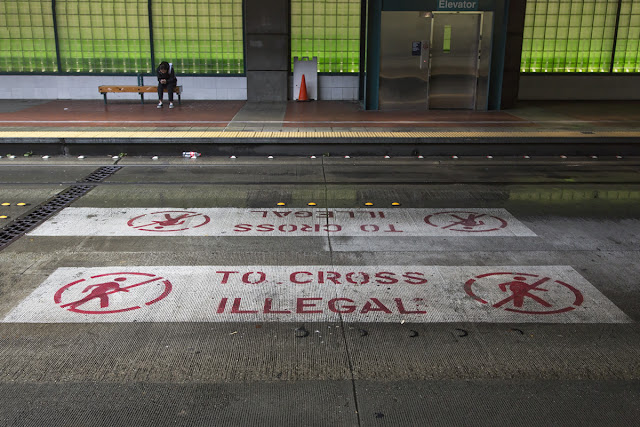 There is a long, broad tunnel under downtown Seattle containing electric buses and light rail. Great idea to avoid all the city center congestion. But if you went down to the wrong platform you'll have to go back up to the street to get to the other side. What would happen if you tried to dash?

Seattle has a great public transit system for a city its size. We've used it a number of times. When we rode it from our hotel to the International District and back Saturday, I played dumb tourist and asked about the fare (which I knew). Well, it's $2.50 regular and one measly dollar for seniors. Amazing. But both times the driver told us not to worry about it and waved us on back.

I have no local material so I'll do Seattle stuff for a while. Tomorrow: Yves Saint Laurent in rain city. What?
Posted by Bob Crowe at 12:01 AM

The transitway here has similar warnings- if you're crossing the road beyond certain points, you're liable for fines.

We have three crosswalks and one set of lights to guide us across our not too busy streets. Our public transit is either a car if you have one or your feet. I use my feet. :)

New fences going up along the commuter line in Haninge after too many suicides.

People are generally disciplined in the US. I am always shocked when in an Indian train station; people cheerfully hopping across the tracks...