In Need Of Direction 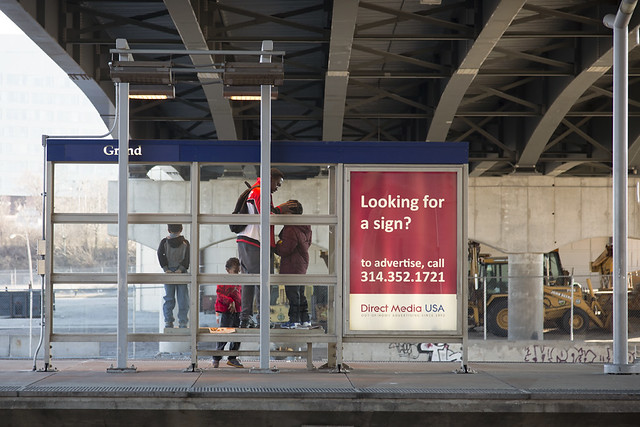 Below the fancy new bus stop seen yesterday, down by the railroad tracks, a family waits for the MetroLink train. The only sign they need will be on the front of the train, stating how far into the Illinois suburbs the next train goes.

Many of us could use a sign. It's just so hard figuring out where to direct yourself on your own.

Our transit system leaves something to be desired. The light rail system is in a squiggly Y shape. We could use several more lines but no one has the will or the money. There are some rush hour commuters but, for the most part, poor people use public transit and everyone else drives. For me to take the system to work, I'd have to drive 10 minutes to a park and ride lot for the train. The whole trip would take two to three times as long as using my car. Mrs. C and I like public transit. I was riding the NY subway alone by 12 and we use transit everywhere in the world we can (the Paris and Tokyo metros are marvels). Just not a very good option here.
Posted by Bob Crowe at 12:01 AM

Its a pity but also a political decision and nowadays not in favor of powers.

That's too bad Bob. Our rail system from suburbs to city is excellent and yet I still find myself driving in more often than not :)

St. Louis Metro: bad connections, frequent derailments, elevators that double as urinals for winos (you have to be good at mouth breathing to use them), crime at the stations...the list is a long one. We stopped using the Civic Center station a long time ago because of all the young men accosting passengers on the platform, trying to get people to pay their fares for them.

We were supposed to get a Metro line in South County--but somehow, they ended up approving yet another line to North County.

We certainly have that situation in common. The same can be said for here. I used to use our light rail system when I lived in my old house because it was fairly close by but, now it's not convenient at all and would probably double my commute time if I tried to use it.
It's funny but, when I worked in St. Louis back in 96 & 97, I took the light rail all the time back and forth from the airport and off to the Central West End to have dinner at a nice restaurant. At that time Phoenix didn't have anything like it and I thought it was a great asset. All the traveling I've done over the years, I've used rail systems all the time, London, New York, Paris, Minneapolis, Chicago and more. In those cities, everyone uses it.

Ours has some issues- including double length articulated buses that don't do very well in heavy snow- but mostly works. We'd have had our full light rail system currently under construction already online by now, but a former mayor, and an incompetent one at that, cancelled the original project as one of his first acts of office.