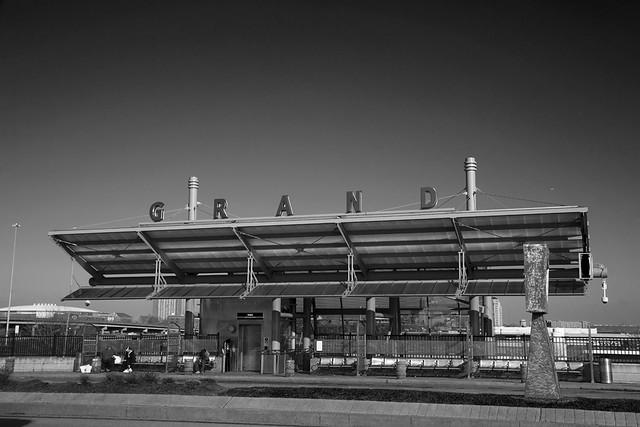 STL has had a simple light rail system for a number of years. The tracks were put on existing railroad rights of way when possible to save money. In the city center, they were put on the edge of a big rail yard running under Grand Boulevard, a major north-south artery through the city.

Some time later the city tore down and replaced the viaduct on Grand over the tracks. A fancy bus-rail interchange was built, with the buses upstairs on the bridge. Down below tomorrow.

Every city needs a good rail/bus service Bob, I'm sure this upgrade will be most appreciated by St Louis commuters. Just for interest before you converted to b&w was that sky really, really blue?

Such a beautiful and clean shot Bob.

Our light rail system is pretty good, as long as you don't have to use the elevators. The winos use them as urinals.

We've got a large transitway system for buses, and are in the midst of a major expansion of our light rail as well.

Too bad it went out of business. Love this old station though and it looks great in black and white.

What a grand photograph!