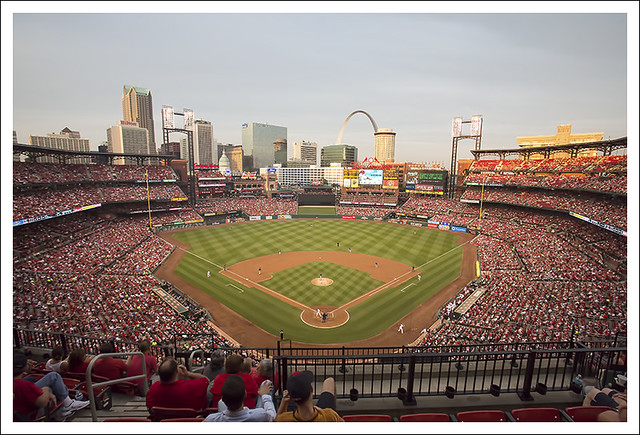 So, we went to the Cardinals baseball game Thursday night. I've referred to the team as St. Louis' state religion. I stand by that statement.

Major League Baseball has 30 teams in cities as large as New York and as small as Tampa. Attendance varies a lot. When you look at some games on TV you see thousands and thousands of empty seats. We went to a Kansas City Royals game a couple of weeks ago and the place was about half full (and KC is in first place in their division at the moment).

The Cardinals are having a mediocre year. They're playing a pretty bad team this weekend, San Diego, yet the place was sold out on a Thursday night. I looked up some statistics. At the three-quarters point in the season the team with the highest average attendance is the Los Angeles Dodgers - bigger stadium, much bigger metro area. The Cardinals are second, more than the vaunted New York Yankees. But the most striking stat is the percentage of stadium seats sold per game. The Cards are over 99%. No one else comes close. It's a sacred place in this town.

Note the image of the Arch mowed into the outfield grass. 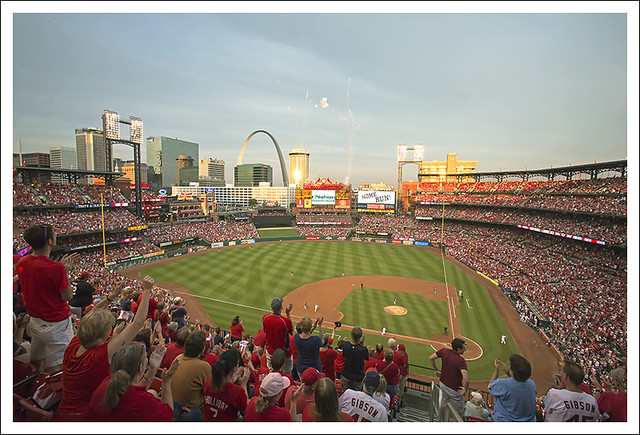 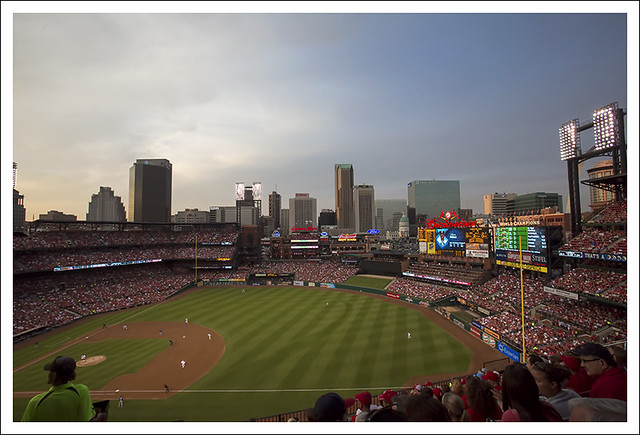 The second and third photo reminds me a bit on the pictures you got by cigarette packs in the fifties to collect. It has that coloring in my eyes.

That is a marvelous touch, incorporating the Arch into the grass.

An off season isn't nessecarily a bad thing... the Cards can build from it.

And the mention of the state religion in St. Louis reminds me of how hockey and the Habs are the same thing to Montreal.

I was also at the game! I have what they call a 10-pack and this was one of the games. Wasn't it a wonderful night for baseball?

Bob, you may be right. It may qualify as a religion here!

The park looks great. I was in St. Louis about four years ago for Final Four women's basketball games, and there were baseball games being played the same nights. If it had worked out, I would have liked to scalp some tickets and gone in to see a game.

Amazings shots of the stadium! With the Arch and all... :-)

Sure would have been great to have been there with you.

Honest;y Bob I'm not a baseball fan, but even I can appreciate how brilliant these images are. Seriously fabulous and so impressive to see the home team so well supported, I love that!The glimpse of the Arch is the icing on top of a magnificent cake.