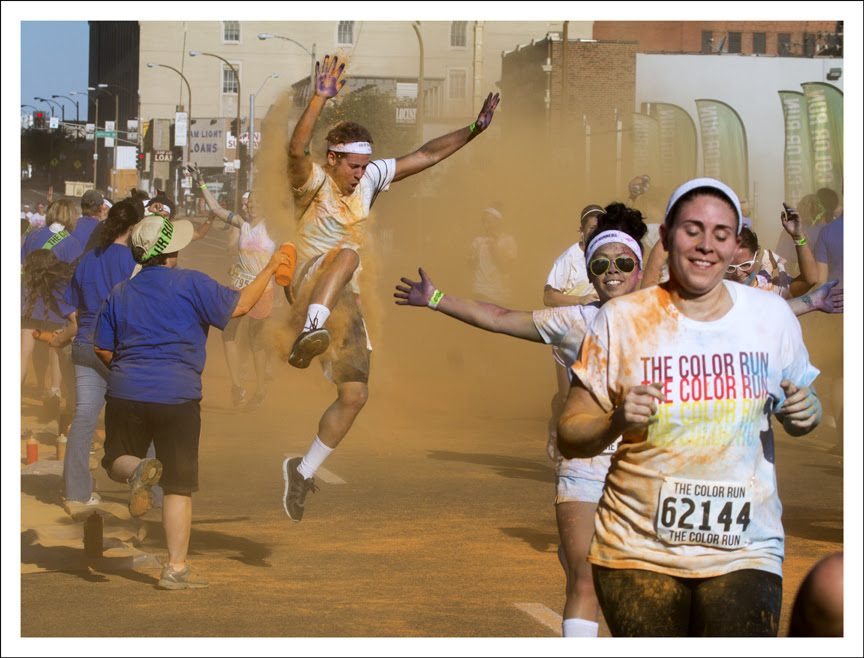 I still don't get it. 15,000 people showed up in downtown St. Louis early yesterday morning to run or walk 5 km while being pelted with bright-colored powdered pigment. The Color Run had no obvious tie-in with a charity, no major commercial sponsor. Was someone trying to work this up into a profit-making event? St. Louis was the first in a series of such runs in second and third tier cities, although there's one in New York City in a remote section of Brooklyn.

More about this in days to come. I may get to shoot another one of these but we will talk about that in due time. The video below has a big splotch of purple dye on the lens that I didn't notice until I downloaded it. Seems appropriate, though.

What a shooting day. Besides the Color Run there was an exhibition of "vintage" baseball under the Arch. The players wore old-fashioned uniforms, had an odd-sized ball and did not wear gloves while playing the field. Last night, the young lawyer who works for us part time got married in a spectacular venue in Forest Park. She will have a CD of photos when she returns from her honeymoon in British Columbia. On the way home from the reception I stopped at a pharmacy and got a splint for my right index finger. 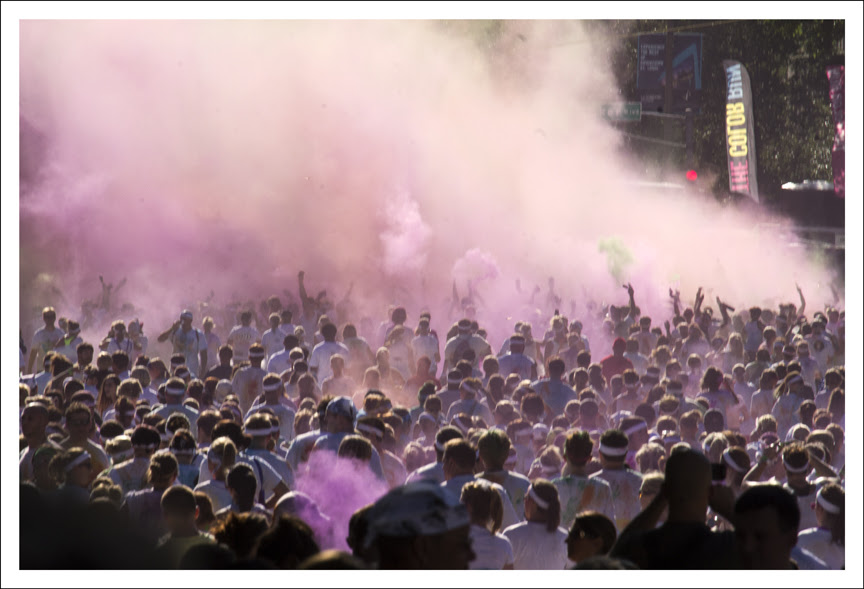 This first photo is sooo cool. A lot of dynamics in the shot. The guy seems rather tricky.

Looks a lot like the Holi parties in India. Everybody is each other sprenkling with colors.

Yay looks like we're in business again Bob. What a strange event, there must be some sort of logic behind it although everyone looks like they're having such fun no logic is required!! This last image is kind of surreal..Look after that 'shooting' finger, it seems to have been working overtime lately!!

Is that all dye/spray paint floatin' in the air down there?
That looks like a 'puff' of maryjane, highlighted in purple. LOVE and sweat are in the 'air'.

Being a runner (of a sort) myself, I was unaware of such an event. Perhaps it hasn't made it out to the west coast yet? I think it would be more interesting to mix the pigment with some water then have at it.

It benefited Autism Speaks. They partner with a different charity in each city, and the Autism Speaks rep was highly visible to the runners, helping announce the countdowns & thanking people for participating.

One of these took place here yesterday as well. I bumped into some runners on the train, post run, and they said the run had been a fundraiser for Breast Cancer.

It looks like a great photo op but I'd have been nervous about my camera.

I am tired just reading about your photo-rich day.

Thanks to Roberta and Wayne for the information on the fundraising aspect. I was paying much more visual than auditory attention at the start of the run and did not hear the announcement. Thinking back, the lack of signage for Autism Speaks is puzzling. I wonder if there is a different beneficiary in every city. I expect to attend another one of these soon out of town so we'll find out.

I've heard there's such a thing as carpal tunnel finger.

I sure don't get it. It looks like it makes one heckuva mess.

It does look like great fun. Good action shots.

Oooh looks like a blast. Good excuse to get messy.

Both these are so impressive. The dynamics inthe first along with the dust and smoke that give such atmosphere and that long shot over the crowd. Brilliant work! Hope your finger is OK ...