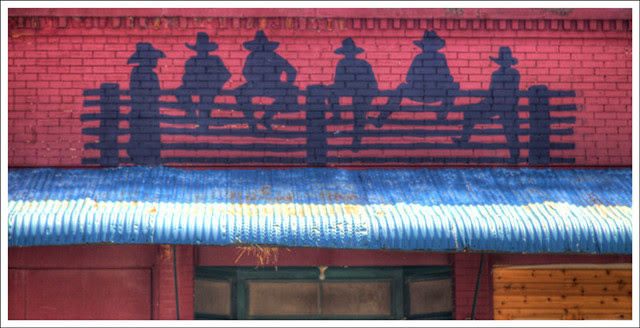 My wife sometimes jokes that she grew up in the suburbs of a town of 350. The family farm was about four miles outside of the hamlet of Bremen, Kansas. It has a bank, a farmers mutual insurance company and a post office. It does not have a grocery store, a gas station or a bar. This is the facade of the defunct saloon, which was called the Pool Hall. Saying that something is a bar in Kansas is a a bit of an exaggeration since they can serve only 3.2% alcohol beer. Not a glass of single malt or malbec in sight. Those cowpokes on the top wouldn't want a drop of no sissy malbec, either.

Too many time demands and too little Internet access yesterday. Downtown St. Louis 365 my go up Monday morning or perhaps Monday evening when I get home. Seven hour drive back to St. Louis today.
Posted by Bob Crowe at 12:01 AM

This one is a really cool shot! Nice capture.

Oooh I absolutely love this. And it's a change from NYC, eh?!