I HEAR THAT TRAIN A-COMMIN' IT'S COMMIN' ROUND THE BEND 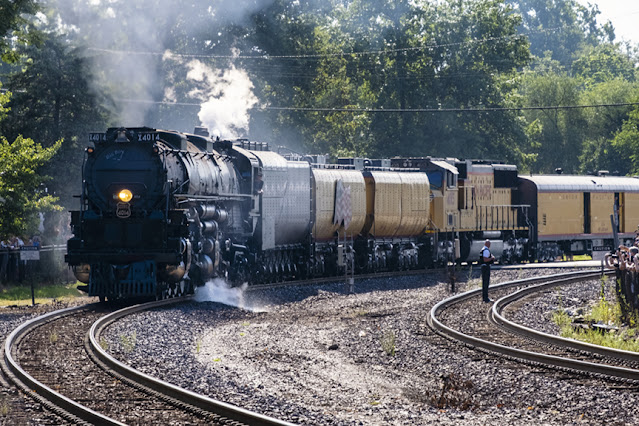 As the massive Big Boy locomotive left St. Louis it made a stop Monday morning in the suburb of Kirkwood, a town big enough to have an Amtrak station. There was quite a crowd but I squeezed my way to the front, looking for a clear shot. The backlighting was terrible but this will do.

As the train pulled to a stop right in front of me it let go a mighty blast of its whistle. Ow! The sound meter on my phone said it was 113 db but I bet the reading would have been higher if the phone hadn't been tucked into a holster. Half a minute of that can cause ear damage according to some web page I found (so it must be true). I haven't experienced the like since maybe the last Led Zeppelin concert I attended.

I can imagine the sound.

Very impressive, but the yellow locomotive behind it spoils the effect a little.

I've never read why they run a deisel-electric with it. The obvious guess is to take some load off the Big Boy so it needs less maintenance. The Big Boy has around 6000HP and the desiel has at least 4500 up to 6000hp.