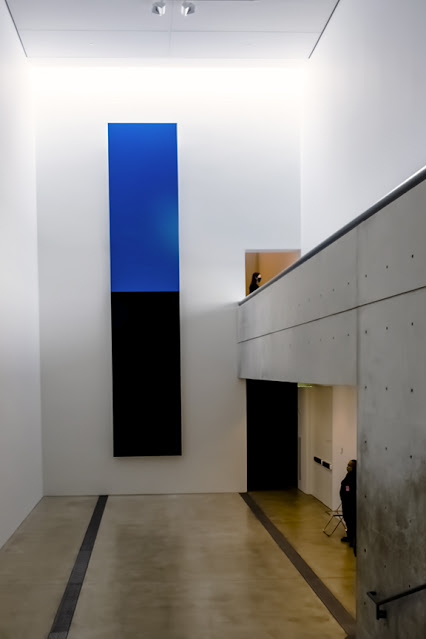 This painting was in the background of yesterday's photo, Ellsworth Kelly's Blue Black. It is one of the two large works that have been in the Pulitzer since it opened. The other is Richard Serra's monumental steel construction Joe, which we will come to shortly.

Kelly's work is often super-minimalistic color field painting. It leaves some people shaking their heads and others in rapture. Kelly, though, could be a bit of a prig about it. When the place opened in 2001, there was a public discussion at the symphony hall with Kelly, Serra and Emily Pulitzer. Serra was warm and funny. Kelly was a bit arrogant and uptight. He claimed that when Blue Back was installed he could tell from down the hall if it was a quarter-inch out of position. The audience laughed. Serra laughed. Now you can look at it for yourself.

That shade of blue does catch my eye, though.