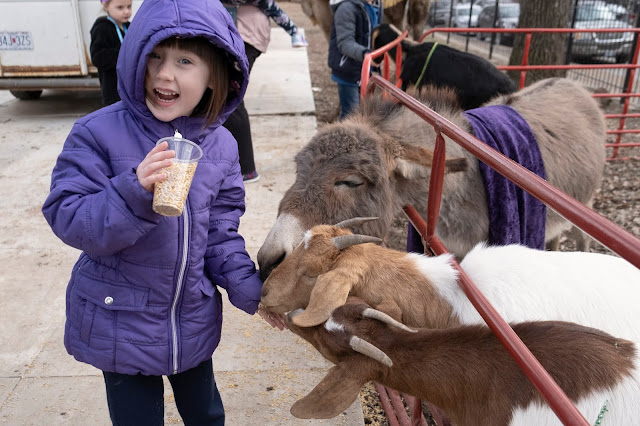 A donkey and two goats eating right out of her hand. No fear at all. She's been to Mrs. C's family farm many times since she was tiny. I don't think I'd want those tongues licking my hand. When I was tiny my parents took me to, um, Central Park.

This kid has quite an imagination. Sometimes when we are in the living room she will run in circles around the coffee table, claiming that she is being chased by dragons. Mom has to scoop them up and pretend to save her. She started it yesterday. After dragons, she claimed she was being chased by ghosts, spiders, snakes and I don't know what. Then she announced that she was being chased by snails. "That's no problem," Emily, her mother said. "Snails are really slow." "But they're on roller skates," she shot back, continuing her race.
Posted by Bob Crowe at 6:45 AM

She has to be an energetic joy tp have around! A super creative kid!!

Her expression says it all.