Okay, So Those Statues Were Getting Kind Of Dull 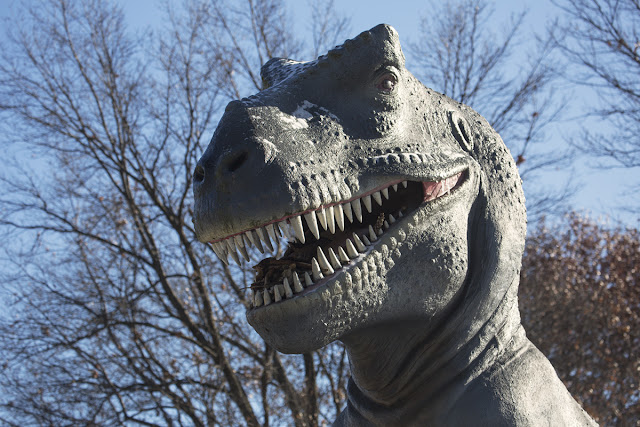 And now for something completely different...

Um, I was getting tired of all those wet bronze heads, too. (Ever notice that Americans say "um" and the Brits say "er" when trying to fill in some vocal space?) Maybe every couple of years, when I don't have an idea in my head, I go by this hard-to-find place in the southeast corner of Forest Park. A major highway borders it to the south and a main boulevard to the east, with tall, steep berms down to the park itself. You can't get there from here.

Round a bend in a bike/running trail and you come upon T. Rex and a triceratops (not shown). At least they lived at about the same time (68 - 66 million years ago) in what is now North America. So you could have, in theory, seen them in a stare-down in a parking lot of what is now the Washington University medical center up the hill. None of their surgeons could have repaired the damage.

Indeed something completely different. Pity that he/she has no dripping teeth. which would increase the threat.

I don't think I ever saw this guy before. He's pretty fierce looking.

He has a powerful bite no doubt with all those pointy looking teeth. Very scary Bob!