A Touch of France 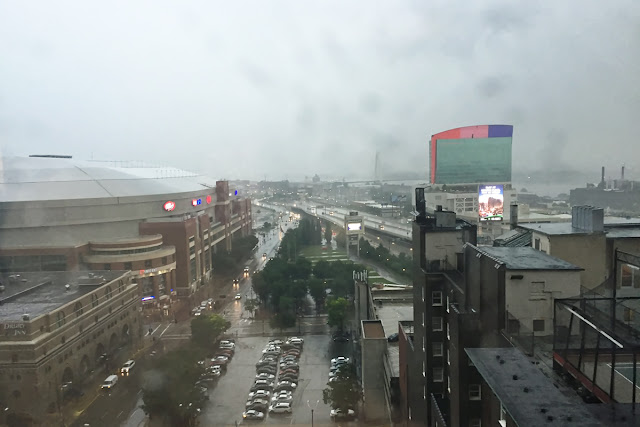 I am so low on material that I have to resort to phone cam shots from my office window. This one got some interest on Flickr. It looks north on Broadway and I 70 during a thunderstorm. The domed stadium without a football team is on the left and the Four Seasons Hotel on the right.

The hotel has a strange LED system on that brick fin that sticks out of it. It's usually illuminated at night but this was midday. This was taken on July 7 so why is it, so to speak, flying the French flag a week before le quatorze Juillet? I dunno. Maybe it's a test.

The next two weeks at work are awful. I'll post as often as I can.
Posted by Bob Crowe at 12:01 AM

You can sense the rain coming. Nice and moody photo!

Something else in my hometown that I've never seen!

That is a very gloomy looking day!

This looks exactly like our weekend weather Bob! Don't forget to take five minutes for yourself now and then!

The weather looks wet and disagreeable. We could use some of that here.