Low Water On The Mississippi 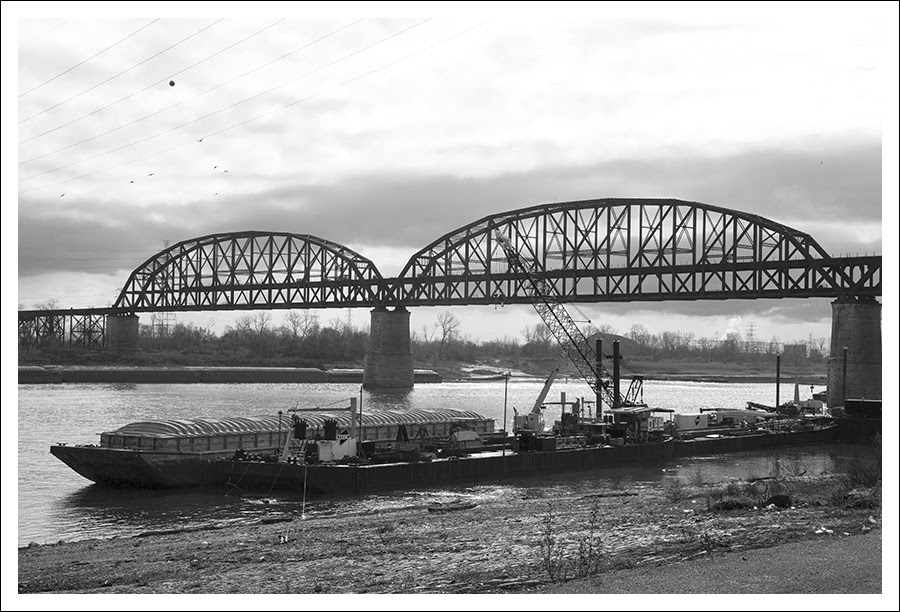 Going, going... The water level on the Mississippi continues to fall. It's at the lowest level in the many years I've been here. It's hard to get a sense of it in one photo but think of it this way: that rough patch by the river in the foreground is the cobblestone levee. It's steeper than it appears. At normal levels, the water is half or two-thirds of the way up. I was standing on the street at the top of the levee and you can see that my POV is well above the top of the barge. In just a minor flood the street would be under water.

Barge traffic is a key element of the regional economy. It is down to one-way traffic in several areas south of St. Louis. If the water drops any further it will close altogether in the next few weeks. Then we'd really have trouble.
Posted by Bob Crowe at 12:01 AM

That is an astonishing photo. Wow. It's hard to believe how low the water is.

I can relate Bob..our dams are really low right now also and with more scorching weather forecast, it's not good. Do you have any rain coming in the next few weeks? Your picture shows exactly how dire the situation is.

This is sad. Good luck for rain and snow melt.

It seems that it is either feast or famine. We've had flooding all week and are glad to finally be drying out.

You really do need a thorough winter with a lot of snow all along the watershed of the Missouri and Mississippi.

Amazing what is happening there. Huck and Jim would be puzzled.