The Law And The Economy 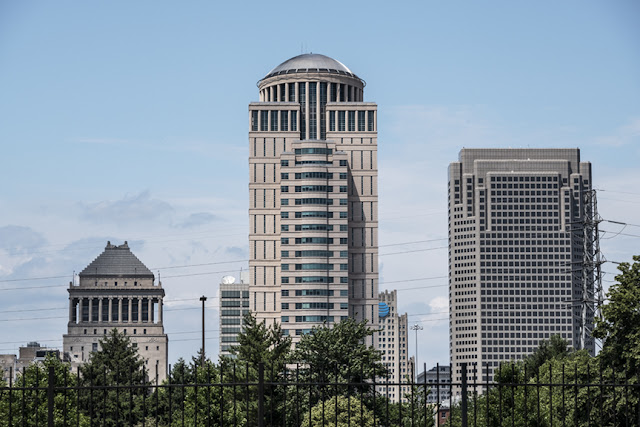 On the left, the old Civil Courts building, where state-level litigation takes place. Hard to see from this distance but the architecture is genuinely bizarre. Worth this short read.

The tall center building houses the federal courts, the U.S. District Court for the Eastern District of Missouri and the U.S. Court of Appeals for the Eighth Circuit. It is the largest single courthouse in America and is 18 years old. It has been controversial from the start because it completely blocks the view of the Arch from the main highway coming into downtown from the west.

The building on the right has the strangest story. After the breakup of the original AT&T into the regional "baby Bells," this was the headquarters of Southwestern Bell. That company started buying up other baby Bells and eventually the AT&T name. The headquarters moved to Dallas and this 44 story tower has been vacant for nine months. It will be hard to use because it was built for a single tenant and now has almost no parking. So another urban ghost building but the biggest one we've ever had.
Posted by Bob Crowe at 12:01 AM

Thanks for the old post link. That is odd! Good perspective for the shot.

When I first looked at the photo, I didn't recognize the building in the middle but, if it is only 18 years old, I was gone from St. Louis before it was built. That's a funny thought. When I was in my 30's & 40's, if I said something happened over 20 years ago, I'd have thought it was a very, very long time. Today, 20 years ago seems like just a few years.