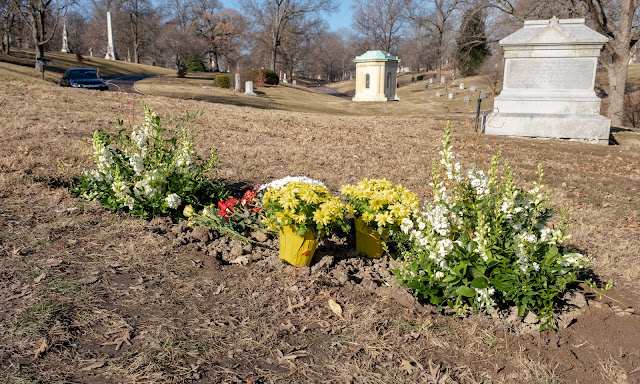 Bellfontaine Cemetery is The Lou's answer to Père Lachaise and Montmartre, except for the discrimination. This is (or at least was) the Protestant cemetery. The rest can go elsewhere, s.v.p.  It is quite beautiful, though, and has few visitors.

Rush Hudson Limbaugh III, the vile right wing radio demagogue, died on February 17 in Palm Beach, Florida, and was buried here last Wednesday. He was from Cape Girardeau, a river town two hours south. He probably had family in this area. His cousin, Stephen, was a highly respected federal judge in STL.

In any event, one of the staff helped me locate it, obviously freshly dug. No monument yet (I'll have to go back for that). I expected many visitors but I had the place to myself at 9 AM. Later, I saw a huge Cadillac Escalade with dual Trump Pence stickers in the back window at the site. And that was all.

This blog advertises the occasional rant but I just don't want the bile in my throat. It's deeply ironic, though, that Rush shares the same graveyard with Tennessee Williams and William S. Burroughs.

Oops. Wrong side of the street.

He ended up where he deserved. In a place with lots of fire, torment, and guys with pitchforks.

A comment was posted here speaking favorably of Limbaugh's anonymous charitable donations. While I do not object to different points of view, it was posted anonymously. My policy of not allowing anonymous comments must be applied consistently.