WE FINALLY GET TO THE AQUARIUM 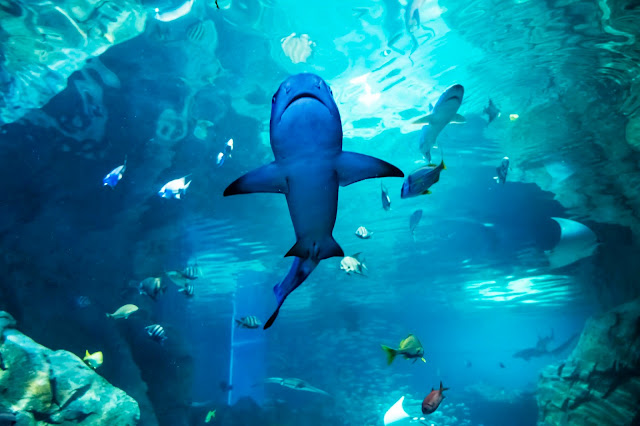 A century ago our main railway station was one of the great junctions of North America. We all know what happened to passenger rail service with the coming of the automobile and airlines. Union Station was a work of magnificent urban architecture, something like a fantasy German castle. The last train left in 1978 and the place went dark.

There have been a couple of attempts to repurpose it. The headhouse became a gorgeous hotel, which endures. The area out toward the train shed was turned into a dining and shopping venue. It failed after the novelty wore off. Now it is full of unusual entertainments and doing well. There is a grand Ferris wheel, seen here before. I won't mention all the other attractions but the main one is an aquarium, something St. Louis never had. It's about three years old and we had not visited. Reviews were mixed: not that big, overpriced (that's for sure).

Ellie and I went yesterday because the kid needed something to do. There were many children's activities. It was great for a seven year old and her photographer grandfather. Maybe not so much for adults by themselves.

I've been to a few of the large aquariums, Chatanooga, Atlanta, Tampa...and they are pricey and demand a whole day to see everything...hope you had a good time at yours. I didn't see a ferris wheel...

I can see that being ideal for the photographer, Bob.

Our original main train station ended up turned into a government conference centre, and these days is home to our Senate for the next few years.